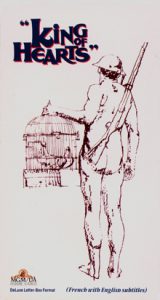 This quirky comedic war film focuses on Scottish soldier Charles Plumpick (Alan Bates), who is sent to a French town on a mission to disarm a bomb left behind by the retreating German army. Plumpick discovers that the area is deserted except for the inmates of the local asylum. The mental patients playfully take over the town and pronounce the soldier their king. While Plumpick is intrigued by the antics of the former inmates, he must stay on task and find the bomb before it detonates.