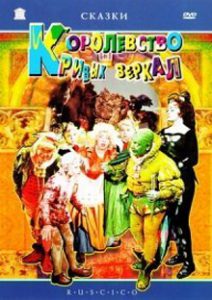 After feasting on her grandmother’s jam with her cat, a young Russian girl named Olya finds herself able to step through a mirror. Doing so, she enters into the Kingdom of Crooked Mirrors. The ruler of this kingdom, King Yagupop (parrot spelled backwards in Russian), produces crooked mirrors that alter his subjects’ perception of reality. For example, the mirrors make the young look old, and the old look young. The hungry look nourished, and the well-fed look willowy. Basically, everything appears as the opposite of what it is.

Olya’s companion in the kingdom is a girl named Yalo (Olya spelt backwards). When Yalo’s friend is imprisoned, the two depart on an adventure to free him. They soon find that the true power behind the throne is not King Yagupop but his rich scheming advisers. Eventually, Yalo and her companions take down the corrupt elites with the help a poorly treated servant. That servant’s name, Bar (Slave spelled backwards in Russian), is a clear nod to the proletarian Russian Revolution.