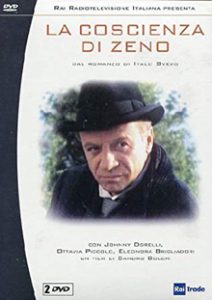 The film is presented as a diary written by Zeno, published by his doctor (who claims that it is full of lies). The doctor has left a little note in the beginning, saying he had Zeno write an autobiography to help him in his psychoanalysis. The doctor has published the work as revenge for Zeno’s discontinuing his visits.  The diary, however, does not follow chronological order; instead, it is structured in large chapters, each developing a particular theme (tobacco addiction, his father’s death, the story of his marriage, and so on). Only the last chapter is a real diary, with pages referring to specific dates at the time of the First World War.

Zeno’s final entry is from March 1916, after he, alone in war torn Trieste, has become wealthy by speculating and hoarding, though money has not made him happy or pleased with life. He comes to a realization that life itself resembles sickness because it has advancements and setbacks and always ends in death. Human advancement has given mankind not more able bodies, but weapons that can be sold, bought, stolen to prolong life. This deviation from natural selection causes more sickness and weakness in humans. Zeno imagines a time when someone will invent a new, powerful weapon of mass destruction, just like the modern atomic bomb, that hadn’t been invented at the time, and another will steal it and destroy the world, setting it free of sickness.