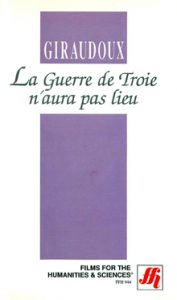 An inspired production of Giraudoux’ famous play about the conflict between those who see war as the greatest risk of all and the ultimate folly, and those who speak of patriotism, manliness, and glory. Like any great work, it has been read to provide different messages on different occasions: when it was written, as a commentary on the growing menace of Nazi Germany; and post-war, as a warning to each new threat of the cold war.