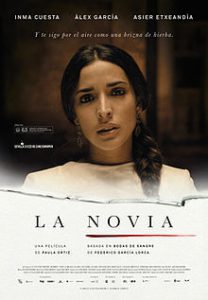 The Bride is Paula Ortiz’s adaptation of Fedrico Garcia Lorca’s Blood Wedding, among the 20th century’s most famous and revered Spanish plays. Nominated for 12 Goya Awards (Spain’s Academy Award) including Best Picture, the story follows a bride involved in a conflicted love triangle full of deception and forbidden passion, which ultimately gives rise to tragic consequences.