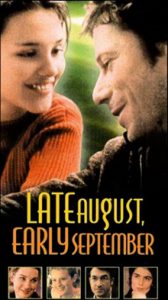 A story about the transition from late youth to early maturity, the film follows several friends and lovers as they come to make decisions on how to live their lives–getting a job more in harmony with ones ideals, committing to a lover, giving up a lover that no longer loves you: a film about grown-ups growing up.

Adrien (François Cluzet), a writer who has had only marginal commercial success, discovers that he is dying and tells his friend Gabriel (Mathieu Amalric), with whom he has had a tumultuous relationship. Gabriel tries to attend to his friend while making sense of his complicated romantic life, torn between dependable Jenny (Jeanne Balibar) and volatile Anne (Virginie Ledoyen). Meanwhile, other friends of Adrien struggle to assess their lives and careers in the wake of his revelation.