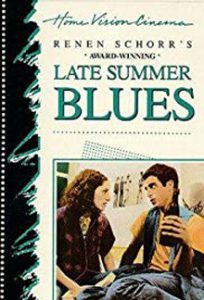 A group of close friends celebrate the bittersweet changes coming to their lives during the summer of their high-school graduation: adult responsibilities, adult romance — and the soberingly adult fact that some of their number are being drafted into the Israeli army. This has very much the feel of a high-school beach-party movie — with music, and in Hebrew — until a sudden and disturbingly realistic reminder of their own mortality finally slashes through the kids’ cheerful, close-knit obliviousness.

In the summer of 1970, seven Israeli friends graduate from high school during the country’s War of Attrition against Egypt. When Yossi (Omri Dolev) is drafted into the army and dies in a training accident, Arileh (Dor Zweigenbaum) becomes an ardent anti-war activist, while musician Mossi (Yoav Tzafir) puts on a protest musical. As the young men and women struggle through the next three years, their lives are captured in home movies by aspiring filmmaker Margo (Shahar Segal).