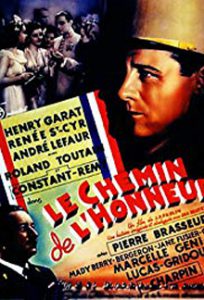 Georges Imbert is a sergeant in the French Foreign Legion who has served with distinction for five years. Now, to his surprise, he finds his services are no longer required.  It seems that he must now leave the Legion after a former criminal allegation has come to light. Meanwhile, Georges’s twin brother Paul has sustained a near-fatal injury in fierce fighting in the desert. Pursued by the police, Georges goes on the run and turns to his convalescing brother for help. To allow his brother to evade capture, Paul lends him his uniform and identification papers, but dies not long afterwards. Georges returns to his home in France and convinces both his mother and Paul’s fiancee Renee that he is in fact his twin brother. It isn’t long before Renee realizes something is amiss and Georges feels he must reveal to her his true identity. Knowing that it is only a matter of time before the police catch up with him, Georges returns to the Legion in Morocco and requests a posting from which he is unlikely ever to return.