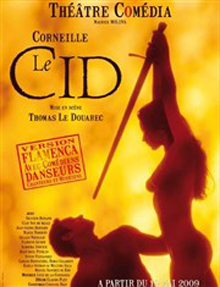 Le Cid is a five-act French tragicomedy written by Pierre Coreille, first performed in December 1636 in Paris and published the same year. It is based on Guillén de Castro’s play Las Mocedades del Cid. Castro’s play in turn is based on the legend of El Cid.