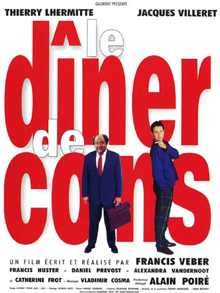 To amuse themselves at a weekly dinner, a few well-heeled folk each bring a dimwit along who is to talk about his pastime. Each member seeks to introduce a champion dumbbell. Pierre, an avid participant of the game, runs into one problem after another that devilishly compromises his secrets, turning the tables on him and his objective, which diverges as the movie progresses. Firstly, wishing to be certain he has selected a winner, he has invited his guest, Mr. Pignon, to meet him at home before setting off; but night of all nights, Pierre has put his back out and it is questionable whether he can manage to get to the dinner.

He solicits Pignon’s assistance in making a series of telephone calls to locate his wife, but Pignon blunders each time, including revealing the existence of Brochant’s mistress, Marlene Sasseur (thinking that she is Brochant’s sister, since her name sounds like “sa soeur“), to his wife Christine and inviting tax inspector Lucien Cheval to Brochant’s house, where Brochant is forced quickly to hide most of his valuables in an attempt to disguise his tax evasion.  In the meantime, Brochant is able to make amends with an old friend, Juste Leblanc, from whom he stole Christine, and through the evening’s events is forced to reassess his mistakes.