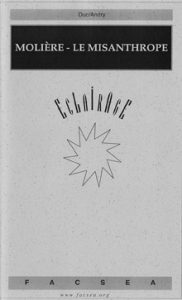 Le Misanthrope is a satiric comedy in five acts by Molière, performed in 1666 and published the following year.  The play is a portrait of Alceste, a painfully forthright 17th-century gentleman utterly intolerant of polite society’s flatteries and hypocrisies. He is hopelessly in love with the coquettish Célimène, as are several other men. Célimène, bored with social niceties, proves cruel to her many suitors; all of them leave her except Alceste, who asks her to marry him. She would consent, except that he wishes to live a simple, quiet life apart from society, while she cannot abandon the gay, frivolous, false society she loves.  In the end, Célimène is more in love with her frivolous lifestyle than with Alceste who departs alone.