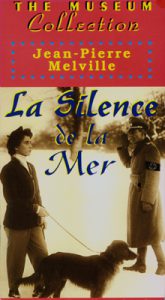 The story, which takes place in 1941, concerns the relationship of a Frenchman (Jean-Marie Robain) and his niece (Nicole Stéphane) with a cultured, naively idealistic German lieutenant, Werner von Ebrennac (Howard Vernon), who occupies their house during the German occupation of France.  As a figurative and literal silent protest against the Nazis and the officer, the uncle and niece do whatever is required of them while the officer is in their house. However they do not acknowledge his presence, living largely in silence whenever he is around. The officer treats the housing situation with care, like he is a guest. Although not a nightly occurrence, the officer begins an evening routine with his reluctant hosts: in his civilian clothes, he knocks on the door of the room in which they have convened for the evening, walking in shortly thereafter knowing that no acknowledgment will be made for him to enter, he visits with them for no more than five minutes before he bids them a good evening as he exits.

Constructed with elegant minimalism and shot, by the legendary Henri Decaë, with hushed eloquence, Le silence de la mer points the way toward Melville’s later films about resistance and the occupation yet remains a singularly eerie masterwork in its own right.