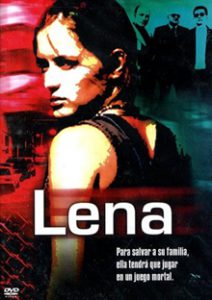 Set in Galicia in northwestern Spain – an area famed for its beauty and smuggling – this film shows a once-thriving fishing and shipbuilding culture fallen on hard times. Feisty, street smart Lena, 18, lives in semi-penury with her hard-drinking slob of a father, Gorrión, and hopes to escape by getting a grant to study in Portugal. Gorrión is mixed up with local drug-smuggling mafiosi, that includes Lena’s godfather, Gitano, their Portugese Cachero, and the strong, silent Milio. One day, Lena returns from her job to find Gorrión badly beaten up: The gang had accused him of stealing. Lena visits the gangsters and offers to help pay off her father’s debt by working for them. After Gorrión forgets to deliver Lena’s grant papers, a fragile emotional bond develops between Lena and Milio. When they set off for Portugal to do a job, events start to unravel.