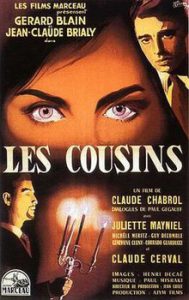 Reserved, bourgeois college student Charles (Gérard Blain) comes to stay with his devil-may-care cousin, Paul (Jean-Claude Brialy), who lives the fast life in Paris. Sensitive Charles, thrown into the whirlwind of his cousin’s social circle, meets pretty Florence (Juliette Mayniel) at a party and believes he has found true love. When Florence breaks his heart, Charles concentrates on his studies with renewed fervor, but soon tensions between the two cousins take a dark turn.  Torn between a desire to kill Paul and to kill himself, Charles loads one of Paul’s revolver pistols with a single bullet in one of its six chambers, spins the cylinder and pulls the trigger while pointing the gun at the sleeping Paul’s head, only to hear just an empty click. Later, Paul, not realizing that the pistol has a bullet in it, points it playfully at Charles, whose panic-stricken gesticulations are not enough to dissuade Paul from pulling the trigger, thereby killing Charles. The doorbell rings and Paul goes to open it with the gun in his hand. The movie ends before Paul reaches the door.