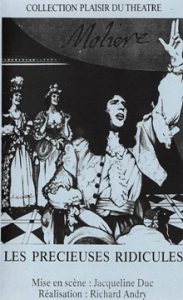 Les Précieuses ridicules, a one-act satire by Molière in prose, takes aim at the précieuses, the ultra-witty ladies who indulged in lively conversations, word games and, in a word, préciosité (preciousness):

Magdelon and Cathos are wannabe précieuses, two young women from the provinces who have come to Paris in search of love and jeux d’esprit.  Gorgibus, the father of Magdelon and uncle of Cathos, decides they should marry a pair of eminently eligible young men but the two women find the men unrefined and ridicule them. The men vow to take revenge on les précieuses.  On stage comes Mascarille, a young man who pretends to be a sophisticated man of the world. Magdelon falls in love with him. Next on stage comes another young man, Jodelet, with whom Cathos falls in love.  It is revealed that these two men, Mascarille and Jodelet, are impostors whose real identities are as the valets of the first two men who were scorned and rejected.  As the curtain falls, Gorgibus and les précieuses are ashamed of having fallen for the trick. In the provinces, the young ladies’ Parisian pretensions attract mockery, while in Paris, their puffed-up provincial naiveté and self-esteem prove laughable.