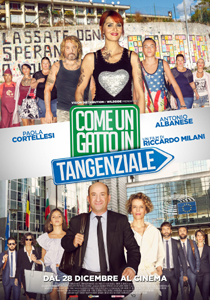 They’d never have met if their children hadn’t decided to become a couple. Monica and Giovanni, both the victims of ruthless prejudices with regard to their respective social classes, are as different as two human beings could possibly be, but they share a common goal: the relationship between their kids must end. To achieve their common resolution, they have to start meeting, however unwillingly, and enter each other’s worlds: Giovanni, used to seeing deep independent films in art-house cinemas, will find himself following his daughter to a chaotic suburban multiplex full of screaming youngsters pushing and shoving and baskets of popcorn rolling over the floor. Monica, on the other hand, used to spending her holidays on Coccia di Morto beach near Fiumicino airport, between expanses of bodies squashed like sardines along the sand, will find herself in the super-posh natural reserve of Capalbio in Tuscany, surrounded by intellectuals, VIPs and far-fetched conversations on contemporary art. These differences seem insurmountable until something between them suddenly changes and both understand they can no longer live without each other, even if their relationship will only last as long as “a cat on the highway.”