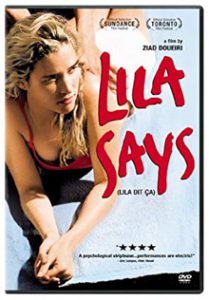 Chimo (Mohammed Khouas) is a nineteen-year-old self-described loser who lives in an Arab ghetto with his mother in post-9/11 Marseille. Unemployed, he turns down an opportunity to study (free of charge) at a writers’ school for teenagers in Paris despite showing real promise as a writer.  Instead, he kills time with his friend Mouloud (Karim Ben Haddou) on the streets of Marseilles.  Chimo develops a crush on Lila (Vahina Giocante), a sexually experienced 16-year-old who moves into the neighborhood. They begin spending time together, alarming both Lila’s possessive aunt (Edmonde Franchi) and Mouloud, who is jealous of his friend.  Chimo gets ever closer to Lila, who seduces him with her sexual games, telling him about her perverted sexual experiences, and the inexperienced Chimo falls in love with her. From a private conversation that Mouloud overhears between Lila and Chimo, he concludes that the girl is a whore, with tragic consequences.