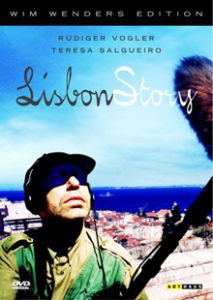 Movie director Friedrich Monroe has trouble finishing a silent black and white film about Lisbon. He calls his friend, Phillip Winter, a sound engineer, for help. When Winter arrives in Lisbon weeks later, Monroe has disappeared but has left the unfinished film. Winter decides to stay, because he is fascinated by the city and the Portuguese singer Teresa. While there, he begins to record the sound of the film.  In the meantime, Monroe spends his time cruising through the city with a camcorder, trying to capture the “unseen image” of the city. Later they meet and Winter convinces Monroe to finish the film.

There is no clear structure to Lisbon Story, no consistently cohesive or progressive dialogue. Wenders subtly reveals some form of portrait of the city, but not in the way one might expect. The film is largely made up of sounds, scattered pieces of Lisbon, strange children, a mysterious filmmaker and Wenders’ protagonist, the sound engineer, Philip Winter.