Loach is Fish Too 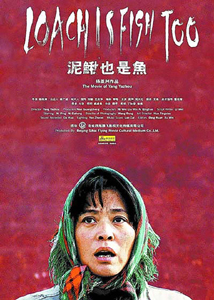 The story of two characters from the countryside who arrive in Beijing hoping to “make it” as unregistered (illegal) laborers. Niqiu is a recently divorced woman who arrives in the big city on the same train as a labor contractor who, as luck would have it, is also named Niqiu (Ni Dahong). Their names mean loach in Chinese: a symbol of low status, a seafood held in contempt by those who can afford to eat more attractive and expensive fish. Foreman Niqiu takes a rather aggressive liking to her right off the bat, though she vigorously fends off his rough advances. Their working relationship interweaves with his never-quite-successful wooing of her: he organizes platoons of workers first to contribute blood for cash. He then finds them work restoring a palace within the Forbidden City, where she joins in. As the two become closer, he finds her work in a haughty upper-middle class woman’s house, tending to the woman’s senile father. A series of darker adventures leads them to temporary illegal housing, through Beijing’s underground sewers to a climax both bitter and sweet. With an aggressively bumptious tempo and expansive, eye- and heart-catching photography, this film posits its own kind of strange beauty. Ecstatic large-scale crowd scenes mingle with “low” humor, fine social observation, and scathing satire. Terrifically organic performances by leads Ni Dahong and Ni Ping let you virtually smell and feel their characters: minor roles are equally vividly realized. Director Yang takes serious risks here, and gets away everything: he combines realism and fantasy, black humor with crowd-pleasing entertainment, all in a fiercely pointed social critique that is new to Chinese theaters.