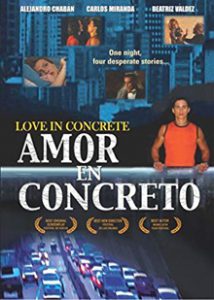 Amor En Concreto is a Venezuelan film whose centerpiece is the capital city of Caracas. A group of individuals provide a picture of the variety of life in the city: Tony, rejected by his father, contemplates suicide when he meets transvestite Clemencia; Carlos finally decides to approach the woman of his dreams after 20 years of admiring her from afar; Hector finds himself beginning a criminal existence after being fired; and Claudia, fed up with her marriage and seeking to start anew, has her plans derailed by a mugger.  Amor En Concreto is a multi-character view of life in the biggest city in Venezuela.