Lucretius and the Toleration of Intolerable Ideas 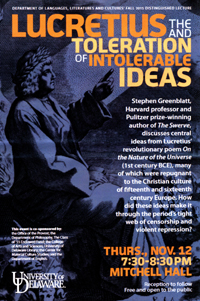 How does one take in concepts that are initially alien or offensive? Pulitzer Prize-winning author Stephen Greenblatt considers why and how Lucretius’ great poem On the Nature of Things—the core ideas of which were utterly repugnant to the Christian culture of fifteenth- and sixteenth-century Europe—eluded the period’s tight web of censorship and violent repression. Never a tolerant age, the Renaissance was heir to the conviction that dangerous beliefs, like poisoned bread, should not be allowed to circulate. Yet it was also an age in love with beauty, and that love, as Greenblatt shows, turns out to have played a crucial role.  The film is a recording of the lecture delivered in the Fall of 2015 to the University of Delaware community.