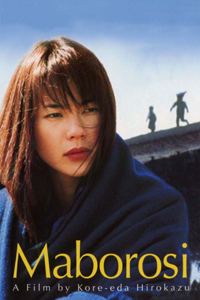 Yumiko and Ikuo are a young Osaka couple who have a new baby. One day Ikuo is walking along the railway tracks and is hit and killed by a train. It appears that he may have done this deliberately although there is no apparent motive. A few years pass. Yumiko agrees to an arranged marriage with a widower, Tamio, and she and Yuichi, her son, move to Tamio’s house in a rustic village on the Sea of Japan coast, shot on location in Wajima, on the Noto Peninsula.  A drunken spat over a bell Yumiko had given Ikuo just before he died causes Yumiko and Tamio to discuss their strong feelings for their lost loves. Shortly afterwards, Yumiko follows a funeral procession and lingers at the crematorium, until Tamio arrives by car to pick her up, at which point she says she just wants to know why Ikuo killed himself. Tamio suggests that, like the will o’ the wisps his father used to see, perhaps something just drew him away from life.