Macedonia: The Land of a God – Volume 2: Amphipolis, Philippi & Thessaloniki 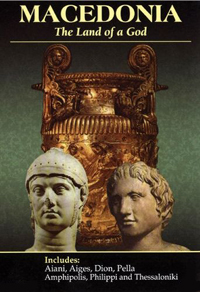 Herein lies the story of a country that spawned the empires of Phillip II and Alexander the Great. At one point, Macedonia extended its hegemony over most all the known world (the Hellenic Age), until the rise of the Roman empire. Within this study we find the rich history of this dynamic culture, from its earliest ages to the Hellenic Age, and from the Hellenic Age through the epoch of the Romans and the eventual importance that Macedonia had for the early Christians.  As a resource on these significant times for the classical scholar, I doubt if there is a better tool out there anywhere.

This in-depth look into the cultural history of Macedonia features all of the museums and excavations in the cities of the ancient Kingdom and focuses on the reign of Philip II and Alexander the Great.  Volume 1 of this definitive series on Macedonia has been praised for both its authenticity and scholarly content.  It was made under the archeological consultantship of the Greek scholar of classical archeology, Dimitri Pandermalis, noted for his work as Director of the excavation at Dion/Mt. Olympus.