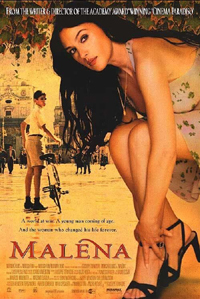 In 1941, Renato was 13 years old and although the world was at war, nothing ever happened in this sleepy village in Sicily until the day he discovered something that would change his life forever… Malena, the beautiful young war widow who was the obsession of every man and the envy of every woman. Because of her, Renato will come to learn all of life’s lessons and find himself in places he never could have imagined.  Malena is the utterly unforgettable story of a boy’s journey into manhood amid the chaos and intolerance of World War II.