Manon of the Spring 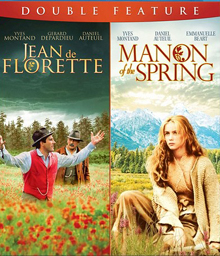 In this sequel to Jean de Florette, Manon has grown into a beautiful young shepherdess living in the idyllic Provencal countryside. She plots vengeance on the men whose greedy conspiracy to acquire her father’s land caused his death years earlier.

This sequel to Jean de Florette stars Emmanuelle Beart as Manon (the daughter of Jean de Florette‘s protagonist). Manon has grown up to become a beautiful woman, a shy and resourceful shepherdess who lives in relative seclusion from the townspeople of her Provencal village, haunted by the tragic death of her father (played by Gerard Depardieu in part one). An outsider, like her father, Manon stays high up in the rugged hills preferring the company of her sheep to her nearby neighbors César (Yves Montand) and Ugolin (Daniel Auteuil). One fateful day, Manon discovers the real reason why her father’s spring ran dry and comes up with a powerful revenge to exact on the men responsible for her father’s downfall. Manon’s action changes her life forever and uncovers long-hidden family secrets that powerfully affect the local villagers. This charming and poignant fable, based on Marcel Pagnol’s classic story is a richly filmed tale of a small triumph over tragedy. Emmanuelle Beart’s beauty radiates throughout the film, she delivers a subtle and captivating performance. Once again, director Claude Berri films with a sensitive eye for the wild beauty of the French countryside that perfectly compliments the seductive and earthy beauty of its nubile young star.