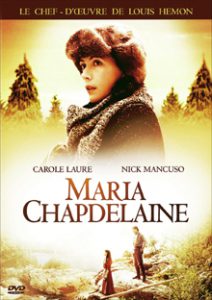 Maria Chapdelaine is set in the Lac Saint-Jean region of Quebec in the early years of the 20th century. The beautiful Maria (Carole Laure), who dreams of an easier life than the one she must endure in the wilderness, gives her heart to a handsome lumberjack (Nick Mancuso) and waits for his return.  Maria, living with her parents and siblings on a remote farm in harsh, picturesque northern Québec, has three suitors: a steady and unimaginative farmer, Eutrope, the Americanized and wealthy Lorenzo, who has sought his fortune in Boston, and François Paradis, a rough and virile logger who captures her heart despite the warnings of her parents and the village priest. For a year, marked by seasonal change in an atmosphere charged with the strangeness of Indians and the demons of the woods, we see Maria at work and prayer, struggling with decisions, choosing to stay in Canada, in love with François, seeking to change his rough behaviors, and dealing with extraordinary loss.