Married to the Mob 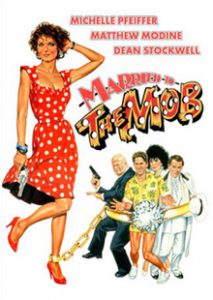 An undercover FBI agent falls in love with a recently widowed mafia wife, who is trying to restart her life following her husband’s murder while being pursued by a libidinous mafia kingpin seeking to claim her for himself.

Angela de Marco (Michelle Pfeiffer) is fed up with her gangster husband’s (Alec Baldwin) line of work and wants no part of the crime world. When her husband is killed for having an affair with the mistress of mob boss Tony “The Tiger” Russo (Dean Stockwell), Angela and her son depart for New York City to make a fresh start. Unfortunately, Tony has set his sights upon Angela — and so has an undercover FBI agent (Matthew Modine) looking to use her to bust Tony.