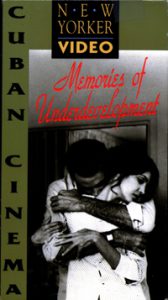 In the aftermath of the Bay of Pigs Invasion, Sergio (Sergio Corrieri), an affluent writer, chooses to stay behind in Cuba while his wife and family escape to neighboring Miami. Sergio is pessimistic about the revolution’s promise to bring sweeping change to his country, and he squanders his days prowling the streets of Havana looking for female companionship. Trouble erupts when his fling with chaste Elena (Daysi Granados) nearly ruins him after her family accuses Sergio of rape.

Sergio looks back over the changes in Cuba, from the Cuban Revolution to the missile crisis, the effect of living in what he calls an underdeveloped country, and his relations with his girlfriends Elena and Hanna. Memories of Underdevelopment is a complex character study of alienation during the turmoil of social changes. The film is told in a highly subjective point of view through a fragmented narrative that resembles the way memories function. Throughout the film, Sergio narrates the action, and at times is used as a tool to present bits of political information about the climate in Cuba at the time. In several instances, real-life documentary footage of protests and political events are incorporated into the film and played over Sergio’s narration to expose the audience to the reality of the Revolution. The time frame of the film is somewhat ambiguous, but it appears to take place over a few months.