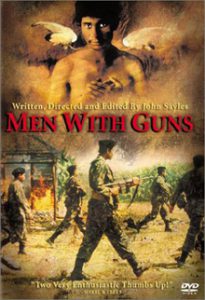 Humberto Fuentes is a wealthy doctor whose wife has recently died. In spite of the advice of his children, he takes a trip to visit his former students who now work in impoverished villages. His trip soon becomes a quest, politically awakening him when he finds out that one of his students was killed by the army.

Dr. Fuentes is a man in search of his legacy: seven medical students he trained to work in impoverished native villages.  But early in his odyssey, he begins to suspect that “men with guns” got there first, and with every step he is confronted by bloody realities he had long ignored.  Now, his is an almost desperate quest, but for a mythical village deep in the rain forest – one last refuge of hope called Cerca del Cielo.