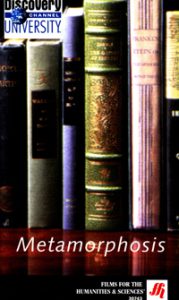 Metamorphosis is an allegorical novella written by Franz Kafka which was first published in 1915. One of Kafka’s best-known works, Metamorphosis tells the story of salesman Gregor Samsa, who wakes one morning to find himself inexplicably transformed into a huge insect and subsequently struggles to adjust to this new condition.  For Gregor Samsa, the ill-fated protagonist of Franz Kafka’s novel, home is where the horror is.  Filmed in Kafka’s native Prague and narrated by actor Jeff Goldblum, this program blends creative reenactments with expert commentary to explore how Kafka’s prescient masterpiece about a man turned into an insect shattered notions of the happy family and anticipated the darkness descending on Europe.  The autobiographical aspects of the novel are richly documented, as are modern-day examples of what is now called Kafkaesque.  A Discovery Channel Production in English.