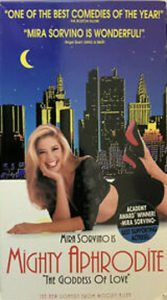 Mighty Aphrodite is a 1995 American comedy film written, directed by, and co-starring Woody Allen, alongside Mira Sorvino. The screenplay was vaguely inspired by the story of Pygmalion and is about Lenny Weinrib’s search for his genius adopted son’s biological mother, ultimately finding that she is a dim-witted prostitute named Linda Ash.