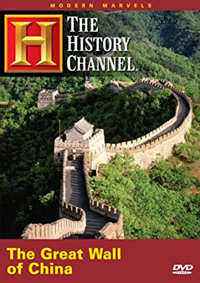 Winding roughly 6,700 kilometers through undulating mountains, grasslands, and desert, its vastness seems beyond the realm of human possibility. A wonder of the ancient world, the Great Wall of China is one of mankind’s most massive building achievements. Yet contrary to popular belief, there is no single wall of China, but rather a series of walls built for different reasons at different times. Modern Marvels embarks on a journey of discovery, investigating the mysterious history surrounding this cultural marvel. Historians and modern engineers discuss the planning, construction, and function of various segments while extensive location footage illuminates the stunning majesty of its architecture. Legend claims that the wall is a wellspring of warfare, madness, and death–can this be true? From ancient China onwards, The History Channel explores the incredible history of The Great Wall of China.