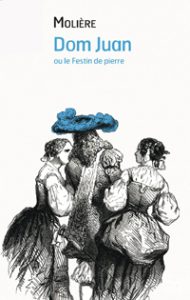 By transforming the character of Don Juan from unscrupulous seducer into a man of overweening pride, cynicism, and disdain, Moliere turned a Spanish theme into a thoroughly French play and offended so many that the play was withdrawn. Posterity has judged him more kindly.

Dom Juan is a five-act 1665 comedy by Molière based upon the Spanish legend of Don Juan Tenorio. The aristocrat Dom Juan is a character who seduces, marries, and abandons Elvira, discarded as just another romantic conquest. Later, he invites to dinner the statue of a man whom he recently had murdered; the statue accepts and reciprocates Dom Juan’s invitation. In the course of their second evening, the stone statue of the murdered man charms, deceives, and leads Dom Juan to Hell.