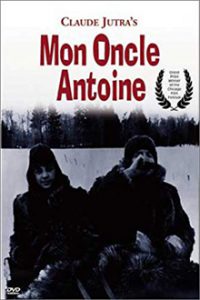 Benoit (Jacques Gagnon) is an adolescent in the care of his uncle, Antoine (Jean Duceppe), who runs a general store in a small mining town in Quebec. To make some extra money, Antoine doubles as the town’s undertaker. During the Christmas shopping rush, Benoit helps out at the store, learning a lot about himself in the process. When he accompanies his uncle to pick up a body of a local boy who has recently died, he is faced with his own mortality, and realizes that life is fleeting.

Claude Jutra’s evocative portrait of a boy’s coming of age in wintry 1940s rural Quebec has been consistently cited by critics and scholars as the greatest Canadian film of all time. Delicate, naturalistic, and tinged with a striking mix of nostalgia and menace, Mon oncle Antoine follows Benoit, as he first encounters the twin terrors of sex and death, and his fellow villagers, who are living under the thumb of the local asbestos mine owner. Set during one ominous Christmas, Mon oncle Antoine is a holiday film unlike any other, and an authentically detailed illustration of childhood’s twilight.