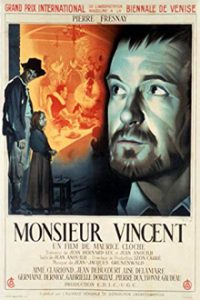 Born into poverty and sold into slavery, Vincent de Paul (Pierre Fresnay) survives to become a respected clergyman and a confidante of the nobility. But when the Black Plague descends upon France, Vincent leaves his comfortable post to become a simple parish priest. Single-minded in his devotion to the wretched poor, he rallies the landed class to create charitable organizations, and in the process revolutionizes treatment of the needy the world over.

Monsieur Vincent is as austere and compelling as its single-minded, iron-willed protagonist. Luminously filmed in black and white by Cloche (The Small Miracle) and cinematographer Claude Renoir (Grand Illusion) from a sensitive script by Jean Anouilh (Becket), Monsieur Vincent is a towering achievement among the world’s great spiritual cinema.