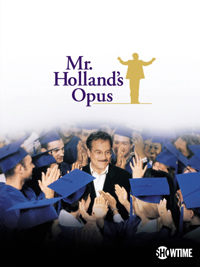 Composer Glenn Holland (Richard Dreyfuss) believes that he’ll eventually write a transcendent piece of music, but in the meantime he’s taken a job at an Oregon high school. Though at first the job frustrates him, and his unconventional methods often draw the ire of the straight-laced vice principal (W.H. Macy), Mr. Holland grows to love his students as the “temporary” position stretches into a decades-long career — and in the end, they reveal just how much they love him back.