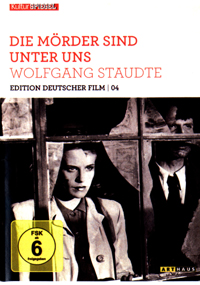 In 1945, after three years in a concentration camp, the artist Susanne Wallner (Hildegard Knef) returns to a Berlin in ruins. Shot in the rubble of Berlin just a year after WWII, The Murderers Are among Us was the first film made in Germany after the war and has since become a classic antifascist and rubble film. Its film noir style successfully blends German expressionism with striking neorealism.

Despite Susanne’s unspeakable experiences, she is filled with a renewed desire for life. When she goes back to her old apartment, she learns Dr. Hans Mertens (Ernst Wilhelm Borchert) has taken up residence there. He is a physician and a former officer in the German army, who is haunted by the memory of the execution of 121 Polish civilians, which he did nothing to prevent. Under Susanne’s care, the broken man gathers new strength and courage. Then, by chance, Mertens meets his former captain and decides to take the law into his own hands.