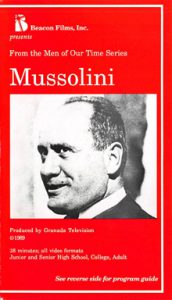 Benito Mussolini created the political system know as fascism. He took advantage of public disillusionment after Word War I to become the supreme authority in Italy.  The unfortunate part of Mussolini’s fascism was that it was all an act. Speaking from the balcony with his chest puffed out, he seemed like the strong ruler of a mighty nation. In truth, however, there was little substance behind the uniforms and military parades.

As Italy was drawn into WWII, it became apparent that Mussolini was not an effective ruler. He allied Italy with the Axis, but not because he liked Hitler. Mussolini thus went from being a dictator to being the puppet of another dictator.