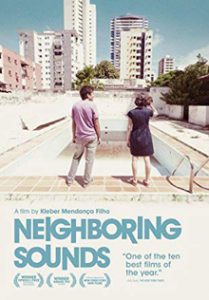 Life in a middle-class neighborhood in present day Recife, Brazil, takes an unexpected turn after the arrival of an independent private security firm. The presence of these men brings a sense of safety and a good deal of anxiety to a culture which runs on fear. Meanwhile, Bia, married and mother of two, must find a way to deal with the constant barking and howling of her neighbor’s dog.  The film is a slice of ‘Braziliana’, a reflection on history, and violence and noise.  In this way, it presents itself not only as a character study, but also as an authentic socio-economic class study in its portrayal of the middle class as a group that, even if well-intentioned, seems blind to the economic and social differences in Brazil.