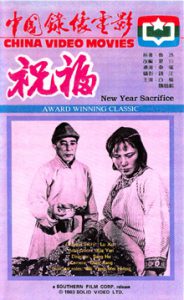 This adaptation of Lu Xun’s short story of the same title concerns the tragic life of a woman (Xianglin’s widow) during the earliest decades of Chinese feudalistic society. Xianglin’s widow runs away from her mother-in-law who plans to sell her. She finds a job as a maid in Mr Lu’s residence in town where she is well regarded because of her diligence. However, her mother-in-law finds her and forces her to marry He Laoliu in exchange for bridal money provided to her in-law’s family. He Laoliu is honest, tolerant and kind but in order to pay off the bridal money debt, he works himself to death and his son is eaten by wolves, so Xianglin’s widow returns to Lord Lu Si’s residence.  However, afraid of being torn limb from limb by Hades, she contributes one-year’s earnings to the temple housing the god of earth.  As she offers her sacrifices excitedly on that blessed New Year’s evening, members of the Lu family scold her and drive her out. In the end, that fateful snowy New Year’s evening leads to her death.