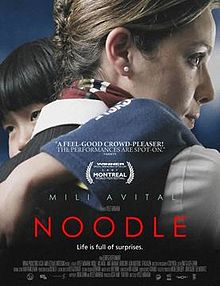 When the Chinese woman working in Israel for Miri Kalderon, an Israeli flight attendant, is suddenly deported for overstaying her work visa, her lack of Hebrew-language skills makes it impossible for her to convince the Israeli authorities that she has a young child with her. Miri, twice-widowed because of the ongoing Arab-Israeli conflicts, has been going through the motions of living, somehow detached from a real connection to life itself. Her decision to help reunite the child—nicknamed “Noodle”—with his mother, now back in Beijing, ends up helping her, not just the boy and his mother, in ways Miri herself could not have expected.