Night Before the Exams 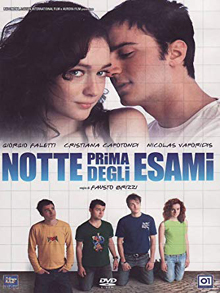 The film follows two teenagers, Luca (Nicolas Vaporidis) and Claudia (Cristiana Capotondi), and their friends as they all prepare for the dreaded maturità (high school graduation) exams during the summer of 1989. At a party, Luca meets and immediately falls for Claudia. The film then follows both teenagers and their friends through their various personal experiences and adventures during the summer. In addition, throughout the film, Luca is desperately trying to get back in favor with his literature teacher (Giorgio Faletti), who will be the teacher sitting in on his oral exams.