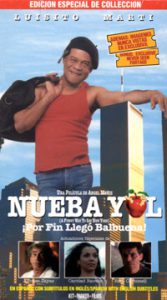 The humble and hardworking Orodoto Balbuena finally gets an opportunity to realize his lifelong dream of reaching New York and living the “American Dream”, but soon finds out that things aren’t as pretty as he thought.  Balbuena is an adventurous immigrant who comes to New York looking for a better life but discovers hardships in the land of his dreams. His friend Fellito pushes him to sell his house to get the money for a fake visa to go to New York. Fellito sells Balbuena on the dream that in New York money is literally flowing around in the streets. With the grand illusion of going to New York, Balbuena accepts and begins a new adventure. Soon, however, Balbuena realizes the misfortune of being an illegal immigrant and that he cannot find a job. The one thing he does find is love, with a woman who is returning to their homeland. After considerable effort and being kicked out of his friend Pedro’s apartment, Balbuena finds two menial jobs: washing dishes and moving furniture to earn some money to sustain himself. Life in New York is not so easy after all. A Nueba Yol se viene a guallar la yuca (Dominican slang for in New York one has to work very hard). Like most immigrants, he always finds a way to survive. However, one thing must be said: his ideas about New York are transformed completely. Missing his home country deeply, he begins a new chapter in his life with a different set of dreams.