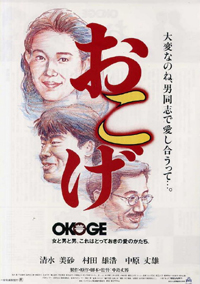 A straight young woman living in Tokyo becomes involved in the lives of a gay man and his married lover.  It is about a young woman fascinated by gay men who befriends a leather craftsman and his married male lover, offers them her apartment as a hideaway, and later acts as a go-between for the leather craftsman when he becomes interested in a homophobic straight man, with disastrous results. The title is Japanese slang for “fag hag.”  Okoge is a distinctly Japanese work in the sense of its being a socially specific assault on cultural conformity and bigotry and in its portrait of options for young, independent, single women feeling pressured into marriage. It also offers us a glimpse into gay life in Japan. Allowances will probably need to be made, however, for national differences in acting styles. Sayoko’s bubbly, childlike manner may, at first, take some time growing accustomed to.