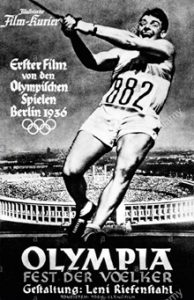 Made by Riefenstahl to document the 1936 Olympics in Berlin, this film was the first Olympics documentary ever made. Often viewed as propaganda, much like Triumph of the Will, Olympia was made using the same groundbreaking cinematic techniques, such as cranes, tracking rails, and multiple cameras. It stands as a monument not only to the Olympics, but to the art of film-making. Time Magazine called Olympia one of the top 100 movies of all time.