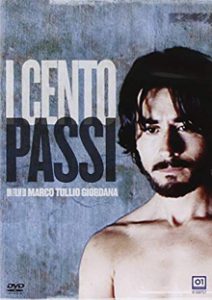 “I cento passi” (one hundred steps) was the distance between the Impastatos’ house and the house of Tano Badalamenti, an important Mafia boss, in the small Sicilian town of Cinisi. The movie is the story of Peppino Impastato, a young left-wing activist who in the late seventies (when almost nobody dared to speak about the Mafia, and several politicians maintained that the Mafia did not even exist) repeatedly denounced Badalamenti’s criminal activities and the whole Mafia system, by using a small local radio station to broadcast his political pronouncements in the form of ironic humor. In 1978 Peppino (30 years old) was killed by an explosion. The police archived the case as an accident or a suicide, but his friends never accepted this conclusion.

Note: This is a true story. More than twenty years after Peppino’s death, the case has been re-opened. Tano Badalamenti, meanwhile, has been convicted in the USA for drug trafficking.