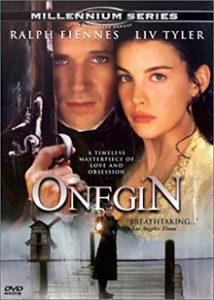 In 1820s St. Petersburg, Russia, the cynical nobleman Onegin (Ralph Fiennes) finds himself the new owner of a country estate following the death of his uncle. Deciding to abandon the fast-paced city for the leisurely countryside, Onegin takes over the estate. There, he soon befriends his neighbor Lensky (Toby Stephens), who introduces the aristocrat to his fiancee’s sister, Tatyana (Liv Tyler). Onegin and Tatyana share an attraction.  A passionate and virtuous girl, she soon falls hopelessly under the spell of the aloof newcomer and professes her love for him, but Onegin’s coldness threatens the relationship.