Otto Dix: The Painter is the Eyes of the World 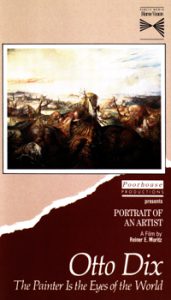 This first comprehensive study of German artist Otto Dix looks at the life and works of the maligned German artist who was blacklisted by the Nazis for his paintings depicting the horrors of war.  Although many of his works were destroyed or “lost in storage,” Dix left an indelible imprint on the world of art.

Early in Otto Dix’s career, his paintings were considered obscene.  Later, he was blacklisted by the Nazis and even arrested on suspicion of plotting to assassinate Hitler.  Who was this degenerate artist? Otto Dix: The Painter Is the Eyes of the World is the first comprehensive study of German artist Otto Dix. With his experiences of war, Dix painted a “pitiless realism.” His art captured the constant movement, raw energy, and atrocities of war rather than its political meaning.  And because many of his paintings were destroyed by the Nazis or simply “lost in storage,” Dix left confusion in the minds of some critics regarding his attitude toward war.  This program explains the work of this important 20th-century artist and seeks to fathom the depths of his vision on war by considering both his life and his paintings. It offers valuable reappraisal of his many well-known portraits and his two famous triptychs, War and City.  (In English)