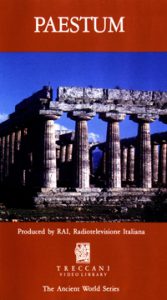 The rich mosaic of ancient history in Southern Italy was primarily shaped by the interaction of three civilizations: Greek, Italic and Roman.  Paestum has preserved the most remarkable images of this process.  Recalling the chance discovery of the archaeological area in the early eighteenth century, this video begins by displaying, through magnificent aerial views, the urban structures that reveal the successive stages of the town’s development.  The viewer is than taken on a tour of Paestum’s monumental buildings.  The temples of Hera and Athena rank among the best preserved examples of Greek architectural styles, on a par with the Athenian Acropolis.  This fascinating survey includes a visit to the nearby early Greek sanctuary of Hera, with splendid illustrations of its votive and decorative sculpture, impressive bronze and ceramic vessels, and painted tombs.  Ranging from great temples to mysterious sanctuaries, the exploration of the public and private religious life of Paestum’s inhabitants is the centerpiece of this unique video presentation.