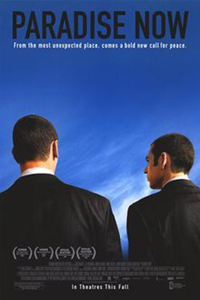 Palestinians Said and Khaled, now in young adulthood, have been lifelong friends living in Nablus in the West Bank. They have both had what they consider a difficult life, now working side-by-side in unfulfilling jobs as auto mechanics in a small garage.  As difficult as the jobs were to get, they feel like they are prisoners in the West Bank. Said has only left the region once on a medical issue when he was six. They blame all of their problems on the oppression by the Israelis. As such, they have volunteered and have been accepted by a Palestinian resistance group to carry out a suicide bombing mission in Tel Aviv: after the initial response to the first bomb, the second bomb would be detonated at the same site. Following the bombing, the resistance group would release pre-taped video messages of Said and Khaled confessing to the bombing in the name of God. Armed with explosives, the two men attempt to cross into Israel, but are pursued by suspicious border guards. Khaled returns to the terrorists, while Said sneaks into Israel and ponders detonating at another target. After Khaled and Said reunite to begin their mission again, Khaled has reconsidered, and tries to convince Said to give up the bombing as well.  A Capstone Video.